On  December 31, 1995, after being invited by a co-worker to attend a Watch Night Service at Kyle's Temple AME Zion Church in Durham, North Carolina, Keith H. Burgess confessed with his mouth and believed in his heart that Jesus, the Christ was his Lord and personal Savior minutes before midnight going into 1996.

After receiving  joining the church, Keith H. Burgess became a license minister in 1997. He has served under the Pastoral leadership of the late Rev. B.C. Young, Jr, Kyle's Temple AME Zion Church, Durham, North Carolina(1996-1998)After leaving the ministry for host of health issues(diabetes, cancer, kidney and congestive heart failure),
Burgess took some time away from ministry to focus on his health.

​While serving at Durham African Methodist Episcopal Zion Church, Burgess served as the Director of Youth, overseeing nineteen(19) churches and as the African Methodist Episcopal Zion Church Annual Conference as their Conference Evangelist. He served on the Finance Committee/Steward Boards in his former churches and is a Life Member of the
​Home & Overseas Missionary Society.

In 2008, The idea of Simon Of Cyrene Ministries became a reality. The "evANGEListic outREACH" Ministry,
which served the community of Raleigh, North Carolina, through Community Soup Kitchens,
Food Pantries, At-Risk Youth Mentoring, Gang Prevention,
Prison Reform and Workforce Development. Our mission is to build the Simon Of Cyrene Ministry Facility,
which will be used to serve in a variety of capacities to Pastor the saved, minister to the unsaved, and evangelize to the unchurched


Pastor Keith H. Burgess  serves as the Founder and Servant Leader/Pastor of Simon of Cyrene Ministries.  He also serves as the Chief Executive Officer and Executive Director of the Dollicia F. Holloway Memorial Foundation.

In this capacity, Pastor Burgess has created a variety of community and human services programs. Through a variety of grant programs and corporate sponsorships, Pastor  Burgess has been successful with providing community outreach initiatives through the implementation of Financial Literacy classes and workshops.

In partnership with the Internal Revenue Service,  Pastor Burgess created and implemented the Volunteer Income Tax Assistance(VITA) Program, which allowed income eligible program participants to file their file Federal and State Income Tax at no cost. Simultaneously, Pastor Burgess developed the Learn and Earn Assistance Program(Project L.E.A.P.),
a job preparedness/readiness initiative, which allowed High School students understand the importance of Financial Literacy
(savings, budgeting, credit, identity theft, insurance), as well as preparation on entering into the workforce after graduation.
Pastor Burgess is a member of the National Financial Educators Council.

Pastor Burgess also serves as Lead Domestic Violence Advocate for “Heels That Heal,” which is a individual and systems advocacy program, which provides “survivor-driven and survivor-focused” individual advocacy on behalf of the Survivors, such as court advocacy, case management, intervention, community awareness & resources to Domestic Violence Survivors and their families.

Pastor Burgess is a certified Male Involvement Coach for  I Am A D.A.D. (Dedicated, Accountable, Devoted), a nationally certified Fatherhood/Male Involvement initiative, which provides assistance to low-income and at-risk fathers in developing essential parenting skills needed in order for men to become socially, emotionally and financially involved in the lives of their children and maintain healthy relationships, effectively parenting their children and providing them with the necessary tools and resources to support themselves and their families.

Pastor Burgess serves as a Community Activist for their community-based hunger relief program, Combat H.U.N.G.E.R.
(Helping Under-served Neighborhoods to Grow & Eat Regularly), which focuses on the low-income & impoverished population within
the under-served areas within Nassau County.

Lastly, Simon of Cyrene Ministries has created the Dalma A. Torres COVID-19 Relief Fund. Through generous donations to our relief fund, our community outreach ministry provides hot/cold meals to our First Responders (Hospitals, Police/Fire Departments/911 Responders, etc). The relief fund was created in memory of the Pastor's Mother, Dalma A. Torres,
who passed away on April 21, 2020
​as a result of COVID-19.
Pastor Burgess believes the Kingdom of God should go outside of the four walls of the church and spread
the Gospel of Jesus, the Christ to every one that has a listening ear and a soul
which hungers and thirsts for the Lord Jesus, the Christ.

Pastor Keith H. Burgess is happily married to the former Ms. Altanya Gerald.
They are the proud parents of 4 children, Torres, Keith Jr., Taevon and Keilah
and the blessed grandparents to Keianni, Jeremiah, Eli and Naomi. 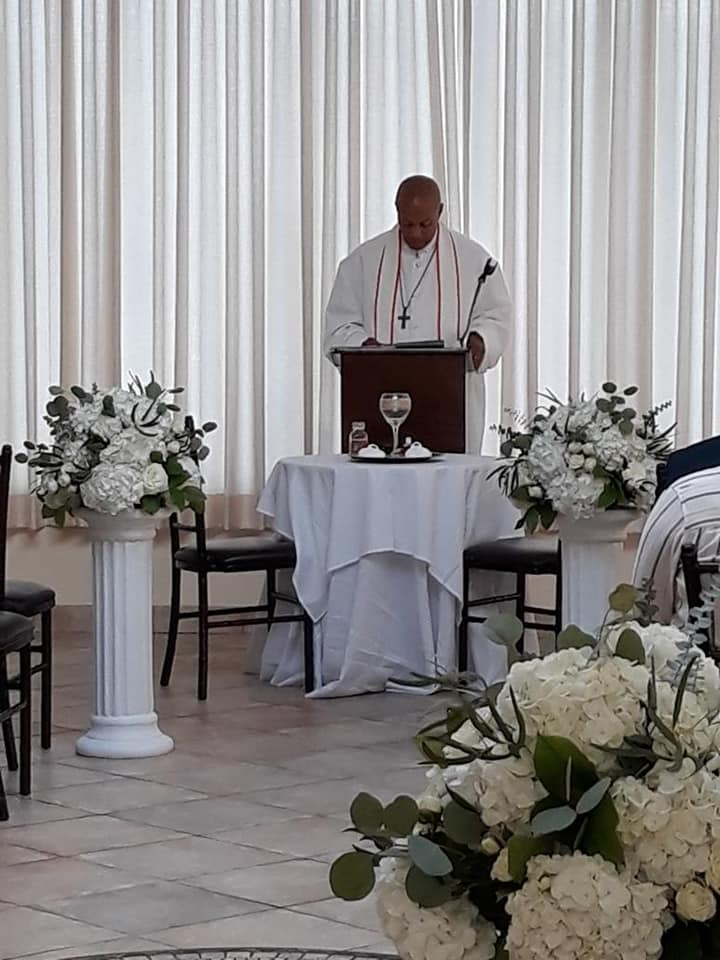